Our Artist of the Month May 2017 is Ryan L Moule. We speak to him about the certainty of images, the role of the audience in his work and his upcoming projects.

Tell us a bit about your practice, how would you describe the work that you do?

Philosophically, my practice is concerned, and often disturbed by how the lens is implicated in the production of various forms of realism that establish a sense of truth by evoking authority through claims of facts.

Our age is defined by the mediation of the image, both personally and politically. Under these conditions I see nothing more inappropriate than a form of image making that would claim certainty or finality in itself. The work I make is a conscious attempt to disrupt any sense of certainty, opening the image to possible change, both physically and metaphorically. The image within my work is always threatened by becoming something other than itself, and I suppose it’s this gesture that reveals the fault lines in the act of making any form of representation. 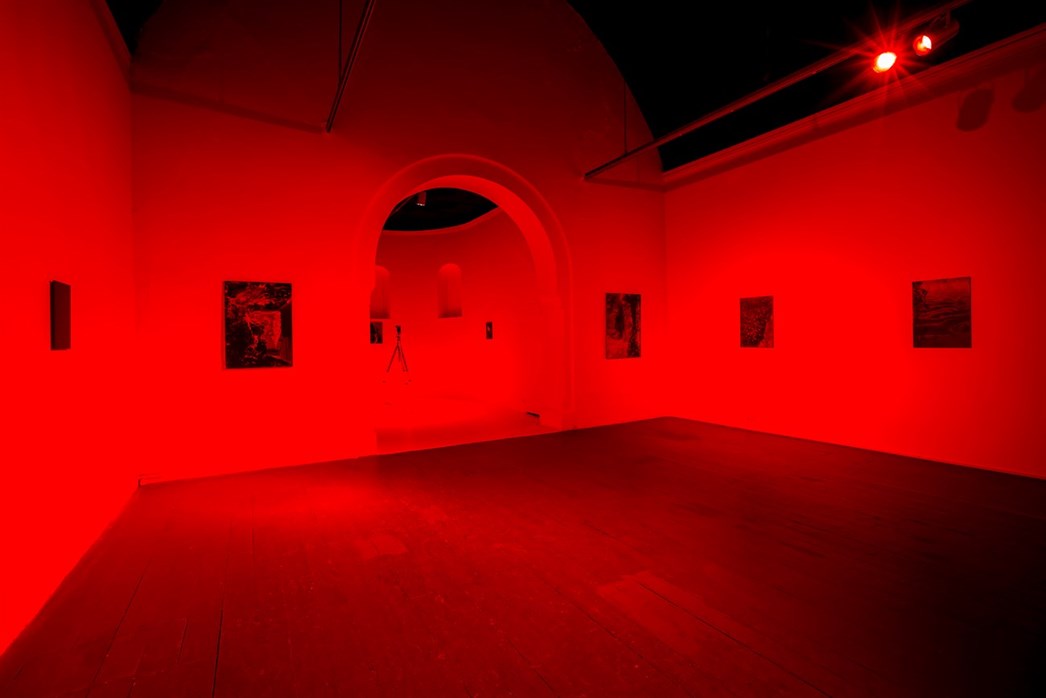 In terms of process, I work with light sensitive, chemically unfixed materials. Paradoxically, the photographs challenge the notion of vision as authority and power. If exposed to daylight the works efface themselves, moving from a form of representation, to blackness and brute materiality.

An important part of my work is the construction of environments that make visible a sense of fragility within the image.

In traditional photographic printing, red is the only colour in the spectrum that acts as a ‘safelight’, allowing you to work with unfixed materials without sensitivity to daylight. My most recent and ongoing body of work utilizes this, by making the gallery into a red-lit darkroom. The chemically unfixed prints presented in these exhibitions are in and of themselves completely site-specific. Any changes in the conditions of visibility cause the work to erase itself.

The notions of catastrophe and disaster link the poetic and political within the work.

In an age where photographs are being taken and stored more than ever, by both humans and machines, what is the significance of corrupting or destroying images?

Photography is the medium of likeness, yet it seems to me to speak only of what it is unlike. As you suggest, there are more photographs being made and stored now than ever before. It’s almost automatic, self-generating or algorithmic in terms of its production. In 1935, Walter Benjamin wrote, The Work of Art in the Age of Mechanical Reproduction, in which he introduces on the notion of ‘Aura’; an atmospheric, sensory force created through a distancing between a work of art and the viewer. One might imagine this distancing affect being perceived as negative, yet for Benjamin, this veiling of the work of art in a form of resistance, charged the work and prevented it from being read in simplistic terms. This distancing allowed for a sense of contemplation to emerge between the work and its audience.

If we think about the contemporary condition, it’s based on instantaneousness and a lack of distance. The question of reintroducing a complication into this instantaneousness, to slow the audience down, is ultimately the task. The significance of corruption or destruction of the image, for me, restores a sense of contemplation in the contemporary experience. In the case of my work, entering the image back into an entropic flow, invests time back into the object. I hope the audience of the work is in some way forced to thought through a process of implication. 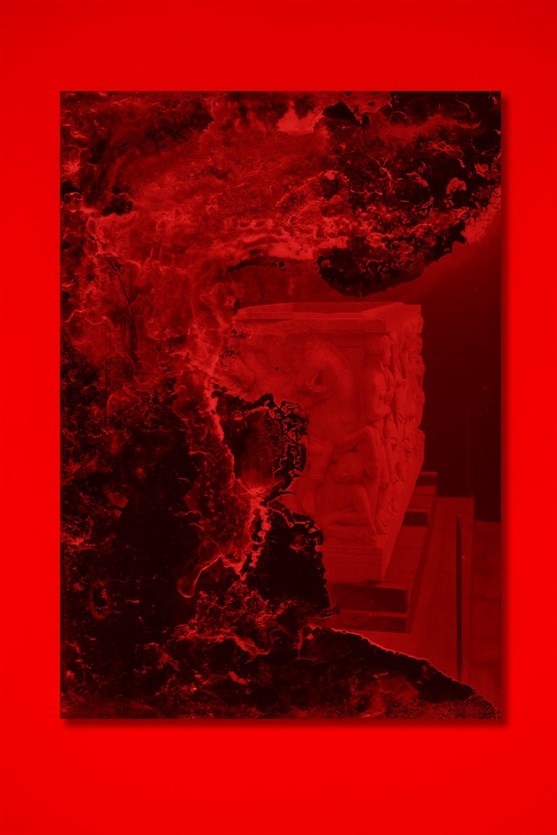 In the case of the book Latent Frequencies and in the exhibition Divisible Remainder, it is the viewer who is responsible for the degradation of the images, they have to decide whether to look at them or to preserve them. Similarly to online leaks of images or information, the public is given an ethical choice whether to look at what is available, or preserve the interests of the person it was taken from. Tell us a bit about how you see the audience being challenged in this way with your work.

I’m interested in philosophers and artists that are concerned with making visible the role of spectatorship. I have a difficult relationship with some forms of photography, mainly because of its ability to pacify the complexities of life by reducing the subject of photograph, essentially to a body. This problematic, atomization of complex situations into the overtly simplistic, is what needs to be challenged by both the producers and audiences of images.

In these times of uncertainty, the uncertain conditions I create within my work are a call for reflection. The strategies created for the display of the work I make is the most important aspect of what I do. In the case of the publication, Latent Frequencies, the act of opening the book has a direct implication on the images disappearance. The notion of distance that I discussed in relation to Walter Benjamin’s writings previously, comes back into play here. The invisible space between the artwork and the spectator becomes an active, charged space.

It’s a slightly different experience with the installation, Divisible Remainder. The spectator enters into a different psychological environment with this work. For me it feels like a form of deprogramming from the outside world as you enter into the exhibition space. The red light covers your body as you orientate yourself; it has a physical impact on you. The chemically unfixed photographs presented, precariously linger at the limits of representation. By collapsing time and material into the same breath, I hope people invest time in the act of looking. There’s a term called ‘dark adaptation’ that is an important aspect of the work. On first glance some of the works appear completely black until your eyes adjust to the lighting conditions. The latent image haunts. 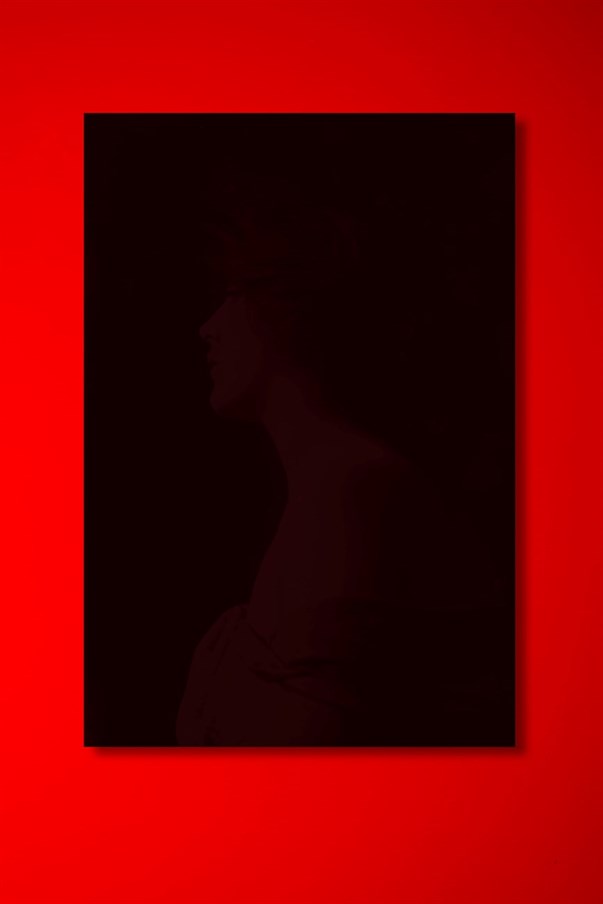 Tell us a bit more about the subject of your photographs, they often seem to deal with spaces, objects in transition, whether eroding shorelines, artefacts being preserved or blooming flowers. What are you looking for in an image which will be eroded?

I’m looking to create an image that feels haunted by history, in need of decoding or translation. The reason I like Benjamin’s writing so much is how he thinks of history as photography. As he remarks in an essay on the Trauerspiel and Tragedy; ‘The time of history is infinite in every direction and unfulfilled in every instant’. It’s this inaccessibility of the past from our contemporary position that fascinates me. With photography’s power to freeze, dislocate, relocate and be analysed outside of time, there is always a fundamental misrecognition in what appears in the photograph.

I was particularly moved by Cormac McCarthy’s 2006 novel, The Road. There are so many passages in that book that have, and continue to inform my image making. The book is an agonizing metaphor of the last pulses of human life, disclosed through the intransigent persistence of that which shapes it, language itself. It’s the torment that emerges between the memory of the world, and it’s forgetting that seems to me so utterly photographic.

'He’d had this feeling before, beyond the numbness and the full despair. The world shrinking down about a raw core of parsible entities. The names of things slowly following those things into oblivion. Colors. The names of a bird. Things to eat. Finally the names of things one believed to be true… the sacred idiom shorn of its referents and so of its reality.’
The Road. Cormac McCarthy, 2006

There’s an indivisible excess, that reflects a pure form of experience in that book. It points to a sense of ancient deeptime, beyond the reaches of human analysis. It’s this excess that I look for in what I photograph.

I admire Pierre Huyghe’s practice a lot. In short, his work explores the process of exhibiting. Often creating site-specific installations, self-generating living systems, (a hermit crab that has made its home in a replica of Constantin Brancusi’s, Sleeping Muse, is particularly brilliant), objects, films, animations, and music. There’s a constant play between the real and its re-presentation that resists an easy explanation. He’s an astonishing artist.
I’m also very interested in the immersive installations of Alfredo Jaar. No form of image making is innocent, and Jaars installations make visible the structures and hidden narratives that govern the photographic image.

I’ve just finished printing new works for an upcoming exhibition at Jerwood Space in London. The work addresses the themes I’ve discusses here, with a focus on the malleability of personal histories. There are motifs that reoccur in this show that act as a resurfacing of something ancient. Unlike the previous works, which are displayed under red-lit conditions, at Jerwood, I’m displaying unfixed prints under 99percent UV filtered glass. The material change of the work will become a significant object  within this exhibition. The exhibition opens on June 27th and runs until the end of August.