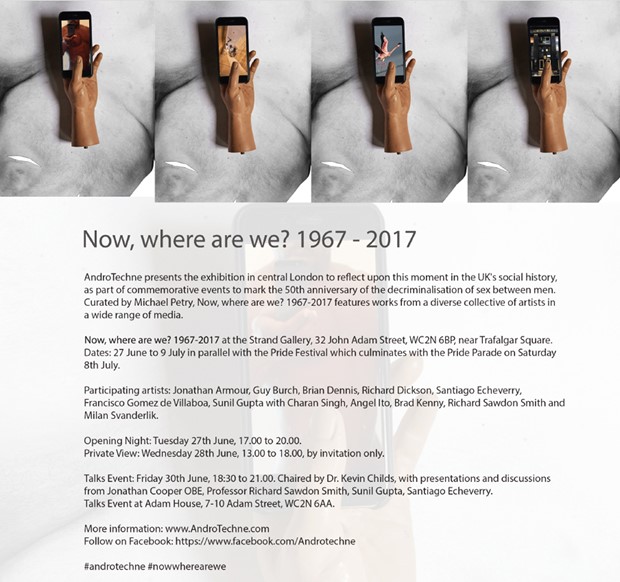 Now, where are we? 1967-2017
Strand Gallery from 27th June to 9th July 2017.
In the UK, 2017 is the 50th anniversary of the decriminalisation of sex between men. Whilst Tate Britain is acknowledging this with Queer British Art 1861-1967, we are taking a more critical view of the current situation. Organised by artists' collective AndroTechne and curated by Michael Petry, 10 artists from the UK and abroad will give their personal reflections on the question, in the context of the rise of intolerance in the world today.
The artists exhibiting include:
Jonathan Armour, Guy Birch, Brian Dennis, Richard Dickson, Santiago Echeverry, Sunil Gupta, Richard Sawdon Smith and Milan Svanderlik.
The Talks Event on Friday 30th June will feature presentations and discussions with Jonathan Cooper OBE, Professor Richard Sawdon Smith, Sunil Gupta and Santiago Echeverry.
Strand Gallery, 32 John Adam Street, WC2N 6BP.