Two main qualities seem to sum up my sculpture: My commitment to using stone, and my desire to make works that include a sense of fun. This has often been achieved by playing with the expectations of the material. 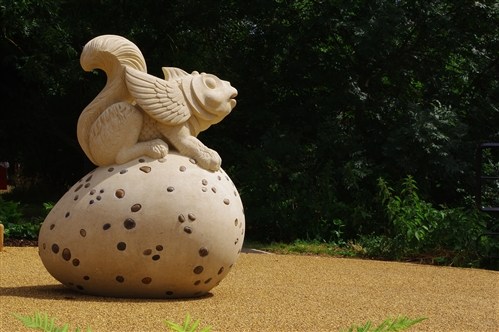 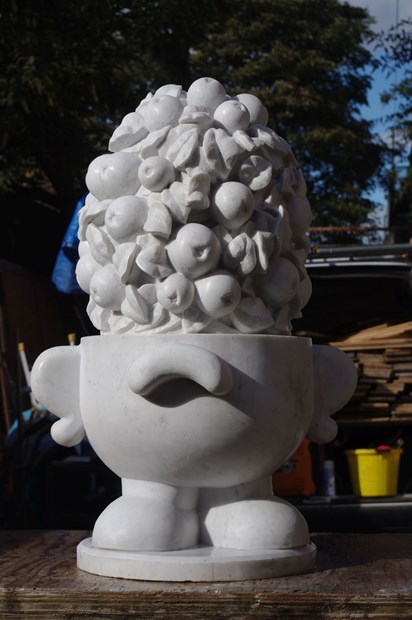 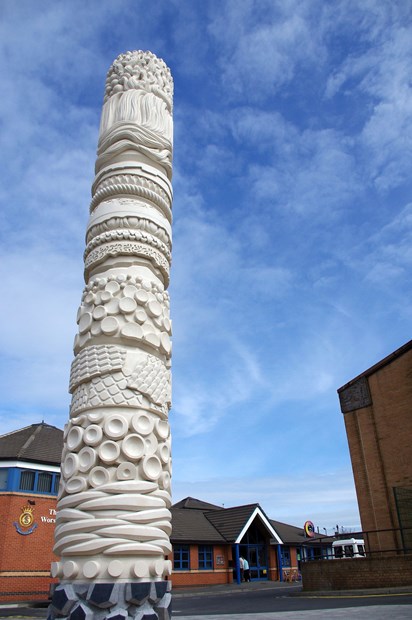 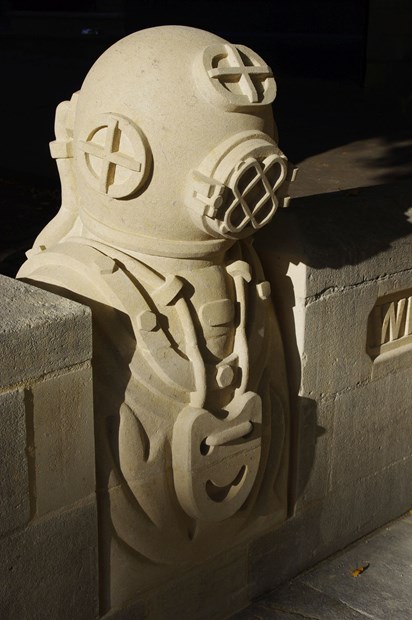 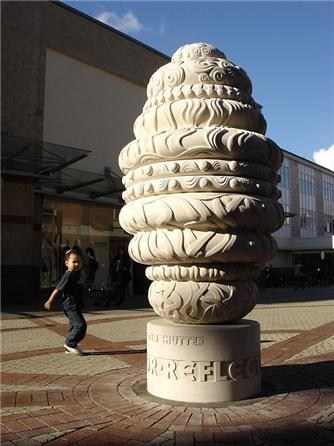 Two main qualities seem to sum up my sculpture: My commitment to using stone, and my desire to make works that include a sense of fun. This has often been achieved by playing with the expectations of the material.

For instance, I have carved hard sandstone coping into rows of soft cushions which could be sat upon whilst waiting for a bus, I have also given a heavy stone bench wings to fly and put a stone sofa on a stone raft. Other approaches have included changes in scale such as caving a monumental granite cake, or the play on context such as placing indoor furniture outside. By these methods I attempt to give the sculptures a presence and a sense of frivolity. Much of my work has been for public sites, so my subject matter is deliberately made accessible to appeal to as many people as possible. They are site specific, tune into local references and they are frequently functional.

When I left Art College I worked and trained for several years as a stonemason. I then moved back towards sculpture by working as an assistant to Anish Kapoor, and occasionally as an assistant to Antony Gormley. I also completed an M.A. at Wimbledon School of Art in site specific sculpture. Over the following years I gained sufficient success with public commissions to work on them full-time. I have also continued to exhibit personal works when possible. The projects I have been involved with have become increasingly ambitious, moving from individual works to more inclusive schemes. My Sculpture continues to develop based on my sustained interest in working in stone and in exploiting its sculptural potential.

2013 Commissioned by The London Borough of Enfield to make an entrance sculpture for Waltham Gardens, Turkey Street, Enfield.

2011 Commissioned by Wakefield Council with support from the Arts Council, to make a major sculpture for the newly built Castleford bus station. installed  Dec 2014.

2009 Invited by Great Ormond Street Hospital for Children to make a sculpture for their new Clinical Research Facility courtyard.

2008 Inaugural sculpture ‘The Pillars of Holywood’ for The Holywood Arts Trust supported by the Arts Council of Northern Ireland, sited on the High Street, Holywood.

2006 Commission to integrate artworks into Westoe Crown Village, a new sustainable community development for South Tyneside Council, One Northeast, George Wimpey and the Prince's Foundation. The project is being managed by Arts UK.

2005 One of two artists on the design team to develop the public artworks strategy for the award winning Chepstow town centre £ 2.3 million regeneration scheme. Commissioned to make a series of sculptures and lettering panels stretching down the High street. Managed by Artworks Wales for Monmouthshire County Council, supported by the Welsh Assembly and the Welsh Development Agency.

2003 Carved Street names into the buildings of the New Bullring Birmingham for Hammerson Uk.plc.

2002 Privately commissioned to make a table and sculpture for a listed house by Regents Park, London.

2000 Collaboration with a Landscape Architect in the re design of Coronation Gardens, Barrow in Furness. It included the designing and fabrication of sculptures, seating, planters and architectural decorations. Funded through an arts lottery award.

Coram Foundation, commission for a name plate for their Cambridge office.

1999 Selected to make paving and seating by Enfield council celebrating the connection of Keats and Lamb to the conservation area of Church Street, Edmonton.

1998 Residency and commission arranged by East Cumbria Countryside Project as part of the Eden Benchmarks scheme to make a landmark work for the village of Wetheral.

1996 Selected to make the inaugural work for the Perth Sculpture Trail, Bellwood Riverside Park. Funded by Perth and Kinross council and the Scottish arts council.

1994 Invited by Look Ahead housing association to make a granite sculpture for the courtyard of Levitt Bernstein’s hostel in Southwark, London.

1993 Invited by Oldham metropolitan borough to make sculptural seating as part of the refurbishment of the maypole monument, Main Street, Failsworth.

1992 Selected by Urbed to make the first work for an urban sculpture trail in Little Germany, Bradford.

1991 Residency, as one of six sculptors chosen for the international granite carving symposium at the Scottish sculpture workshop, Lumsden. Supported by Banff and Buchan district council and the Henry Moore sculpture trust.